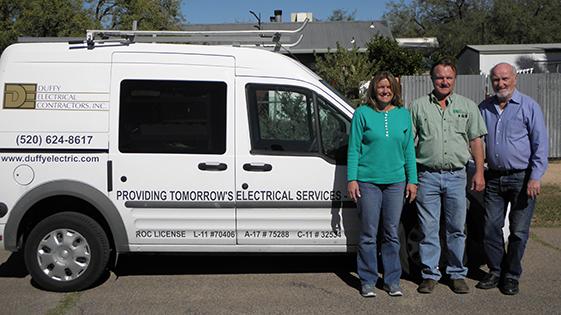 Duffy Electric was started by Jerry Duffy, Sr., who began his work in the electrical industry as an apprentice electrician with Oestreich Electric.  After serving a five-year apprenticeship, Jerry became a journeyman electrician in 1966.  At that time, Oestreich promoted Jerry to foreman status.  He then supervised and installed projects until starting Duffy Electrical Contractors, Inc.  in 1969.

Our experienced management staff has over 120 years of cumulative experience in the industry and employment with Duffy Electrical Contractors.

Tucson resident since 1956.  Graduated from Rincon High School in 1960.  Began electrical apprenticeship in 1961, working for Oestreich Electric in Tucson.  Employed at Oestreich throughout five years of apprenticeship training.  Upon successful completion of the program, I was promoted to a foreman position with the company and oversaw the completion of several construction projects for the next three plus years.  In 1969, left Oestreich to form Duffy Electrical Contractors. Retired from daily operations in August 2015.